To determine the fastest sports we looked at a few things, an item that travels at high speed that has to be caught or returned by another person requiring split second reaction times.  This was covered in Part 1 The Fastest Sports in the world.

Or someone travelling at high speed, in a non motorised sport which we will cover now.  These are the real dare devils of sport and travelling at the speeds reached in any of the below take a lot of nerve..  So here it is, enjoy! 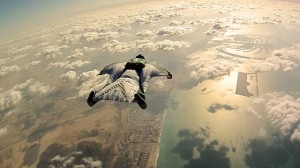 This is the fastest sport in the world and also happens to be the most dangerous!  Gliding through the air at speeds or 120-140mph these guys are the ultimate dare devils.

The 8 most extreme and dangerous sports!

The fastest non motorised land sport – Speed skiing is the sport of skiing downhill in a straight line at as high a speed as possible, as timed over a fixed stretch of ski slope. There are two types of contest: breaking an existing speed record or having the fastest run at a given competition. Speed skiers regularly exceed 150mph.  As of 2016, the world record for skiing was 158.424 mph, set by Ivan Origone

Alpine skiiers are also worth of a mention.  These massively skilled skiers can reach speeds of over 80mph.

Traditional luge takes place on an ice course with an aerodynamic sled and is the fastest olympic sport.  Lugers have recorded speeds up to 90 mph as they navigate their way through a series of twists and turns. Manuel Pfister of Austria, reached a top speed of 154 km per hour (95.69 mph) on the track in Whistler, Canada prior to the 2010 Winter Olympics.

Crowdfunding for the winter Olympics

Bobsleigh or bobsled is a winter sport in which teams of two or four teammates make timed runs down narrow, twisting, banked, iced tracks in a gravity-powered sled.  They typically reach speeds similar to lugers 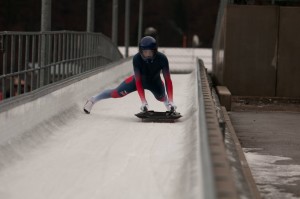 Skeleton is a winter slidding sport in which a person rides a small sled, known as a skeleton bobsled (or -sleigh), down a frozen track while lying face down (prone). Unlike other sliding sports of bobsleigh and luge, the race always involves single riders.  They typically reach speeds of 80mph.

Pictured above is Kimberley Murray on her skeleton sled

The best Winter Olympic moments ever

PledgeSports have helped out lots of winter athletes crowdfunding their way to the winter olympics, if you know someone that needs to raise money for winter sports get in touch with us via info@pledgesports.org, or visit www.pledgesports.org and hit €œCreate A Campaign€ to start raising money today!

And if there is another fastest sport you can think of, please let us know.