10 Greatest NBA Players of All Time 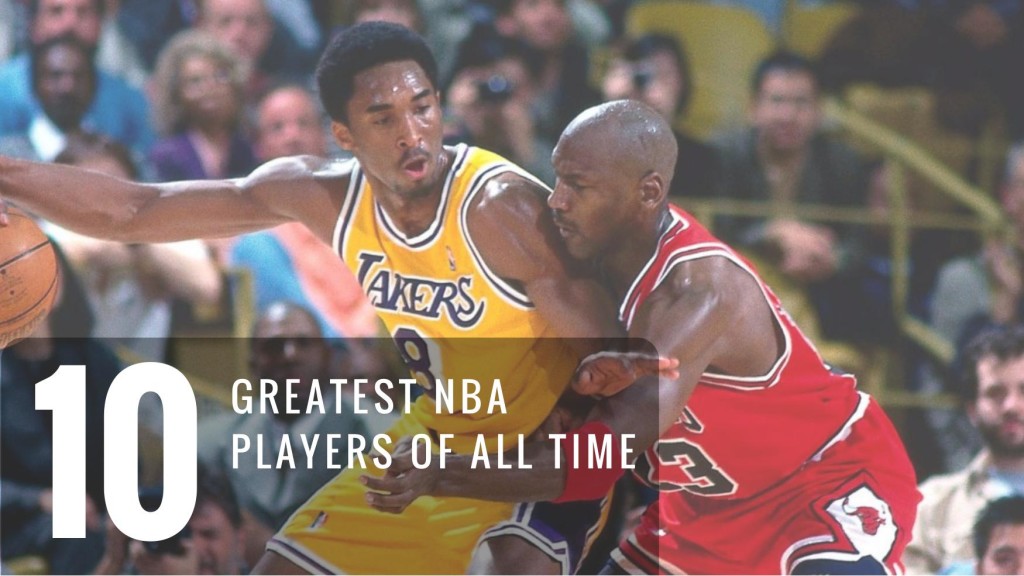 At PledgeSports, we help athletes and teams from every sport known to man woman or child raise money and attract sponsorship through our sports crowdfunding platform.  We also have a very keen interest in sports trivia and the latest sport to get the best of is basketball!

Without further ado, heres a rundown of the 10 Greatest NBA Players of all time:

Kobe Bryant is no.10 on the all time greatest list and deservedly so. He was not blessed with a huge frame or massive hands, but he had tremendous amounts of ability and skill. His lucrative 20-year career was filled with all the major awards that NBA had to offer. Bryant’s impressive 17 All-Star appearances and 5 championships undoubtedly convey what Bryant was all about.

Shaquille O’Neal was probably the most dominant physical player the NBA has ever seen. He was a beast on the court and bullied his way to glory. Shaq is a four-time NBA champion paired with three-time Finals MVP, he ruled the court and you could always rely on the big man scoring close to 30 points per game with 60% shooting skills. His ability was clear from an early age at Orlando where he was described at super-human.

10 best tennis players of all time

Bird was a king at scoring back in the 80’s, he dominated and produced some of his best basket in the 1984-86 years, where he won three consecutive MVPs and two of his three championships. Although he was one of the best scorers and passers to ever play, he was also the top-10 rebounder nine times in his career. His numbers do not do him justice because he was also an excellent stealer and appeared in the top 10 three times. Larry was definitely one of the greatest.

Tim was not a man for his staggering numbers, but he was always a team player with a huge heart. His final four seasons he produced some of his best basketball. He led his teams with huge pride and his defense would always rise to the challenge. He was the man who helped the Spurs return to the finals in 2014 and his hard work seemed to always pay off, if you ever needed a man to pick you up when your team were trailing he was always there. Duncan slots in at 7th in the all time greatest list.

The 10 best athletes in the world

Russell was a true gentleman and most beloved player the NBA probably has even seen. He played center for the Boston Celtics from 1956 to 69. A 5-time MVP and 11-time NBA champion, Russell is regarded as one of the most decorative NBA players of all time. He opened the doors for African-Americans in the NBA, he pretty much invented the “blocked” shot. He was known for being the ultimate winner and deserves to be number 6 on the all-time list.

Kareem makes the top 5, he is the all-time leading scorer in the NBA with 38,387 career points. “Cap” played in a remarkable 20 seasons and shot over 50% in all of them except one. Six championships and six MVP’s to his name, the man was some what a machine. It seems rare that people never talk about such a player, he was among the very best, people compared him to Jordan with his incredible skyhook shot. Kareem is no.5 on the list of the greats.

The 10 best boxers of all time

Magic Johnson in at no.4 on the all-time list of greatest NBA players ever. The greatest point guard of all-time, the man who paved the way for so many others. In his rookie season, he aided the LA Lakers to the finals and in the crucial game 6 he stepped up and played forward center. Some say he is the greatest to wear the Laker shirt but some may argue Kobe has a shout. 5-time champion and 3-time Finals MVP, Magic was a great of his generation. He showed excellent athleticism and leadership in his career and Johnson is deservedly renowned as an all-time great.

Wilt Chamberlain stands out from the rest. He is a man that usually refered to about his mad, insane scoring numbers.  In 1962, over a period of 80 games, Wilt averaged a remarkable 50 points and 26 rebounds. That is unheard of in the modern era, his stats were just outstanding. He is the only player to score 100 points in a single NBA game. He is the only player ever to average 30 points and 20 rebounds per game over their entire career. He has won 2 NBA championships and earned 4 MVP awards. Chamberlain is placed at no.3 and a hall of famer in the basketball world.

The greatest UFC fighters in the history of the sport

Some say James is the greatest of all time, we cannot argue with his outstanding career to date but he is just pipped to the number 1 slot of the all-time greatest NBA players ever. “King James” or “The Chosen One” he is a man who embraces basketball and takes it to new heights. A world-renowned figure in sport, his huge size, athleticism and skill that he brings to every game he has become the smartest and most complete player the NBA has ever seen. 3-time NBA champion and 4 MVP’s to his name, LeBron is chasing Jordan to become the greatest.

The most watched sports in the world

Mr. Michael Jordan, the G.O.A.T of basketball. He is the complete basketballer, outstanding scoring ability accompanied with being an excellent defensive player. The belief and spirit Jordan showed on the court made him stand out from the rest. He tookover and he delivered. He brought the NBA to life and redefined the nature of what it was like to be a professional basketballer. 6-time NBA champion and 6-time MVP, a 14-time All-Star and 10-time scoring leader, the man was a machine of the game. He was and still is the greatest NBA player of all time.

We answer the much debated question, “what’s fastest sport”

Do you agree with our rundown of the greatest NBA players ever? If not let us know!